Only days after Somalia made a big deal about resuming relations with the Republic of Kenya, the latter decides to suspend commercial flights to Mogadishu.

A memo circulating the new Kenyan Aviation authority order stated that only ‘Medevac flights and United Nations on Humanitarian Mission only’ were permitted to leave for or come from Somalia.

KQ would be making the trip to and fro Hargeisa’s Egal International Airport on Sundays, Wednesdays and Fridays weekly effective from the 28th of this month, May 2021. 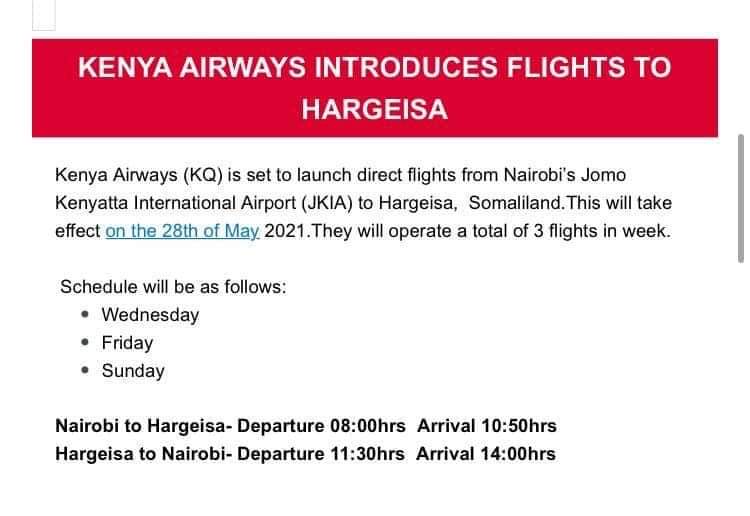 Booking for the much-awaited flights has already started indicating how useful is the new, 2-hr flight connection that the international, East African carrier embarked on was to much-relieved passengers.

President Musa Bihi Abdi of the Republic of Somaliland made a visit to Nairobi on 12 December 2020. Somalia used the visit as an excuse to sever ties with Kenya on the pretext that the latter was violating the ‘integrity’ and ‘national sovereignty’ of the country – an expected step since relations between the two countries was already on an all-time low following an acrimonious dispute raging between them.

It was during this historic visit that the two East African democracies decided to optimize each other’s potential for their respective peoples.

Areas to be developed included the Kenyan Airways direct flights.

KQ will be joining several more international carriers that are already plying this virgin country’s vast trade opportunities, such as Ethiopian, or are scheduled to begin soon such as the Turkish and Qatari airlines.

Kenya also finally decided to open a representative office in Hargeisa and upgrade the Somaliland Mission office in Nairobi to a consulate status.

The Kenyan flag will be sharing the Hargeisa skyline with those of Djibouti, the United Kingdom, Turkey, Taiwan, and Ethiopia.

#KENYA HAS SUSPENDED ALL FLIGHTS TO AND FROM #SOMALIA STARTING ON TUESDAY FOR THREE MONTHS JUST DAYS AFTER MOGADISHU RESTORED DIPLOMATIC RELATIONS WITH NAIROBI FOLLOWING A MEDIATED BY QATAR. PIC.TWITTER.COM/4UFWLNR8VQ

Somaliland: President meets with members of the visually impaired community