Following the military invasion of Russia in Ukraine, Somalia and China started flexing muscles in gestures and words none can miss at targets aimed – Somaliland and Taiwan. 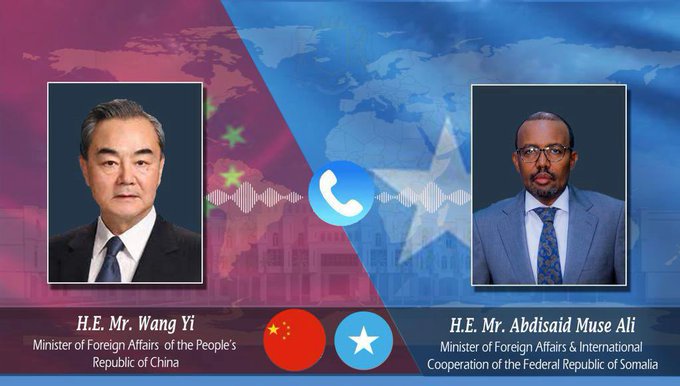 “Spoke on the phone today with H.E Wang Yi, Minister of Foreign Affairs of the People’s Republic of China. Our historic relations is firmly built on mutual respect for sovereignty, territorial integrity, political independence and unity,” the Minister tweeted of the discussion held.

The words sovereignty and territorial integrity which the minister used in this context and the importance of order he placed them in his Tweet unmistakably spelled out veiled threats the two sides wished Somaliland and Taiwan to take note of.

“(We) Further reaffirmed that we will jointly work together to solidify our multifaceted cooperation underpinned by these principles and to jointly counter disruptive elements to harmonise our relations further,” he stated, elaborating on why the two sides thought the talk of sovereignties and territorial integrities were deemed necessary at this juncture of time.

China and Somalia, obviously, same as – perhaps – China wanted to reassure themselves that they had valid reasons ‘to jointly counter disruptive elements’ such as those the two authoritarian administrations thought were a threat to their largely imagined egos. 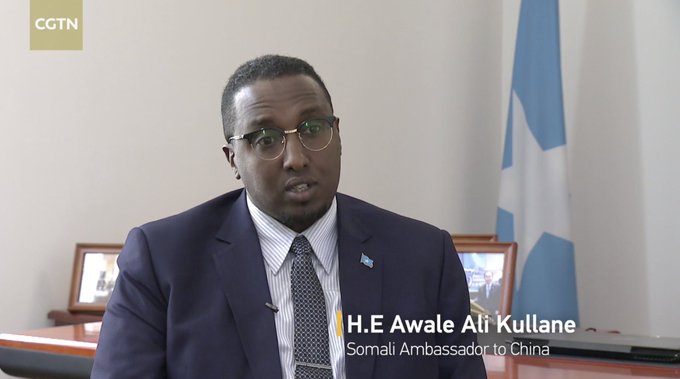 Ambassador Kulane, apparently incensed by the growing, development-based relations between the Republic of Somaliland and Taiwan on multi fronts spanning over agriculture, fishery, health, education, technology, and energy – among others, could not hold back his chagrin.

“We condemn Taiwan’s relations with Somaliland and we are always committed to safeguarding the independence of Somalia and its territorial integrity, from whether its Taiwan or any other entity,” he stated.

“This could lead to instability in northern Somalia and insecurity in the region as it maintains diplomatic ties with a break-away region,” the ambassador, not surprisingly, still thought Somaliland was in northern Somalia despite a thirty-plus years gap ending thirty turbulent years under Somalia domination during which it lost hundreds of thousands of innocent lives in order to take back the legally unbinding merger it went to with Somalia in 1960 as an independent, internationally acknowledged state.

Ambassador Kulane went on to legitimize all agreements and MOUs between Somaliland and Taiwan. He claimed Somalia deemed these as ‘fake’.

Somalia resources, he said, were not to be plundered under fake agreements gunning clearly at resource development initiatives between the two sides which included drilling for oil.

Barely a week earlier, a former Somalia ambassador to China, Mohamed A. Awil, wrote an article published in the Global Times, in the same vein giving it the title ‘Why we must say no to secessionist’s visit to Taiwan’.

Mr. Awil argued that the cooperation between Taiwan and Somaliland meant the end of ‘pan-Somalism’ to Somalia as it was a violation of its professed ‘integrity’ and so on. He further emphasized that the Taiwan-Somaliland ties were a harbinger of instability to the region. How he deferred explaining.

“It should therefore be noted that the engagement of the Taiwan Ruling Party, i.e., the Democratic Progressive Party (DPP) with proponents of Somaliland secession will simply lead to bringing Instability and Insecurity in Somalia, undermining Peace and Stability of Somalia, (and that) Taiwan (was) interfering with Somalia’s internal affairs, independence and unification against the UN Charter and relevant international agreements,” he wrote (in his own words).

The spate of malice evident in the words of Somalia’s diplomats – past and present, and the renewed sprint towards ‘stronger’ relations with China were directly spurred by a high-caliber delegation visiting Taiwan on February 19. It was led by Dr. Essa Kayd, the Somaliland Minister for Foreign Affairs and International Cooperation. Ministers of Finance, Planning and Livestock/fisheries were included.

The delegation concluded a number of understanding with their Taiwanese counterparts.

China’s foreign ministry could not conceal its ire against the Somaliland-Taiwan tie-up and the undeniable bond between them that further blossomed during the five-day Somaliland visit at the time. The ministry said the Somaliland-Taiwan daring cooperation was ‘fanning the flames to undermine the independence and unification of other countries, harming others without benefiting themselves’.

Rising to the challenge, the Somaliland Foreign Minister, Dr. Kayd, speaking to the press shot back in an emphatic tone.

“We were born free and we will stay free. We will run our business the way we want. China cannot dictate, no other country can dictate,” he said.

The delegation paid a courtesy visit to President Tsai Ing-wen during their stay during which the two hassled democracies reiterated their determination to further cement ties in view to the development of the welfare of their respective peoples and countries.

A possible invasion of China on Taiwan has been in the air for some time now and is extensively speculated on by major world media outlets. Fears of this happening intensified since Putin’s bravado turned into tanks and troops crossing over to Ukraine and hitting hard at cities and key installations since Thursday.

It may not be a coincidence that Somalia, today, also welcomed commandos Turkey trained for it to add to a monster army the former is building despite it being dismally accounting for the billions of Dollars the internationally pumped into it to strengthen its internal security.

Similar to like-minded weak regimes in the past, Somalia may be thinking of directing these massive forces to strike elsewhere in the region to divert public attention.

Lasanod: City at the Margins